Heirloom Audio Productions: A Review of Wulf the Saxon

Dear Homeschooler,We follow a semi-classical rotation for our history and geography content. This year, we are studying the Middle Ages, starting with the fall of the Roman empire and ending at the Renaissance. So, I was VERY excited to hear that we had an opportunity to review Wulf the Saxon from Heirloom Audio Productions because it fits perfectly into our curriculum. 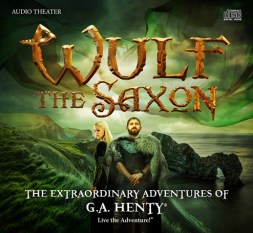 This exciting tale follows Wulf, a young thane, as he journeys alongside Earl Harold Godwinson, the eventual successor of King Edward the Confessor in the eleventh century, in a series of adventures and battles as rival powers war to seize power for the throne of England, culminating at the Battle of Hastings in 1066.

This fully dramatized production uses voices, music, and sound effects to capture and hold the attention of the listener — a true theatric work of art.  This set contains 2 audio CDs, is two and a half hours long, and is recommended for ages six and up. Once again, Heirloom Audio Productions showcases a cast of tremendous talent, including, Brian Blessed, Chris Larkin, and Helen George.

An impetuous youth,  Wulf, an young Saxon nobleman, learned temperance, justice, and loyalty by treating the denizens of his land with fairness and kindness. Eventually, he came to London and joined the ranks of Earl Harold’ Godwinson’s inner circle and remained a loyal subject and true friend for the entirety of his life.

Shipwrecked on the shores of Normandy, Harold and Wulf are captured by the Norman Count Conrad and held prisoner in his castle. Wulf and another page escape and obtain the aid of a kind, rivaling Norman Baron, who negotiated the release of Harold.

Soon later, William, the Duke of Normandy, convinced Harold to become betrothed to his daughter and tricked Harold into swearing fealty to himself and to Normandy upon holy relics. They return home to England where Wulf was honored for his faithful stewardship. Wulf’s  devotion is called upon again during the Welsh Wars, and the utter victory of the English caused the Welsh not to rise up again for 100 years.

With the death of King Edward, Harold ascended the throne. With Wulf at his side, Harold faces the challenges of an unstable England, attacks from Norway, and the invasion of William the Conqueror, eventually dying heroically in the Battle of Hastings. Loyal till the end, Wulf fought bravely beside his lord and friend. The Norman victory saw the end of the Saxon line of English kings. Wulf lived the rest of his days in peace married to the daughter of the kind Norman Baron who had saved Harold long ago.

Heirloom Audio Productions offers a monthly subscription to their Live the Adventure Club that provides access to many different resources to extend fun and learning:

We love listening to all the stories from Heirloom Audio Productions and highly recommend each and every one.