History is one of those subjects that can be taught so many ways. I love to incorporate varying techniques to help my kids get a fun and well-rounded view of the past. Historical fiction is a great way to spark some interest, and that is why I was excited for the change to review St. Bartholomew’s Eve by Heirloom Audio. Heirloom Audio combines high quality production with engaging stories and an all-star cast to create a riveting adventure worthy of inclusion in any classroom. The God-centered storyline always proves God’ faithfulness and engenders self-reflection. 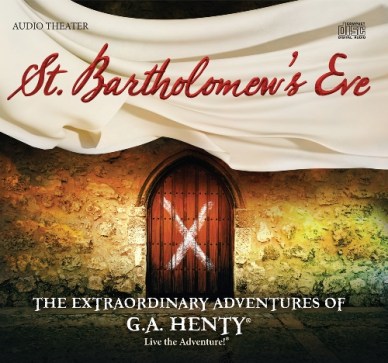 St. Bartholomew’s Eve follows two young cousins, Francois and Philip, as they navigate the treacherous times of the French Wars of Religion as Catholics and Protestants engage in confrontation after confrontation in the sixteenth century. As part of the Huguenots, the French Protestant group, the young men fight for the freedom to live apart from the Catholic church and practice their faith in peace. Believing God to be their true Commander, they engage in combat for their faith, celebrating victories and suffering losses. At one point, the Huguenots are trapped in a castle with the enemy closing in. With certain defeat on the horizon, spirits are low until a small boy starts singing “A Might Fortress is Our God”, inspiring the troops. Renewing their efforts, they beat the odds and claim victory. Conflict continues to escalate until St. Bartholomew’s Eve.

The marriage of Protestant Henry III of Navarre and the Catholic French princess Margaret of Valois seems to be an attempt to bring the split population together; however, as many prominent Huguenots gather to celebrate the royal union, chaos and carnage ensue as thousands of Huguenots are slaughtered. Murder and massacre continue to spread over the following weeks. How do our young protagonists Francois and Philip fair? You’ll have to listen to find out!

As many of you know, we love audiobooks, but the audio dramas from Heirloom Audio are of the highest caliber. From the voice talent to the inclusion of sounds and music, we become a part of the story. I particularly enjoy historical fiction, and St. Bartholomew’s Even transports us back in time as we learn the actual cost of religious freedom.

One theme that I appreciated in this story is the constancy of our faithful God as a stronghold and refuge. The words of the hymn still hold true and inspire us today:

“A mighty fortress is our God,
a bulwark never failing;
our helper he, amid the flood
of mortal ills prevailing.
For still our ancient foe
does seek to work us woe;
his craft and power are great,
and armed with cruel hate,
on earth is not his equal.”

Have you listened to listened toSt. Bartholomew’s Eve or any of the other amazing audio dramas by Heirloom Audio? I’d love to hear about it in the comments below. Check out my reviews of the other great selections in the series The Extraordinary Adventures of G.A. Henty: